Spotlight On: Voting Rights in Georgia! 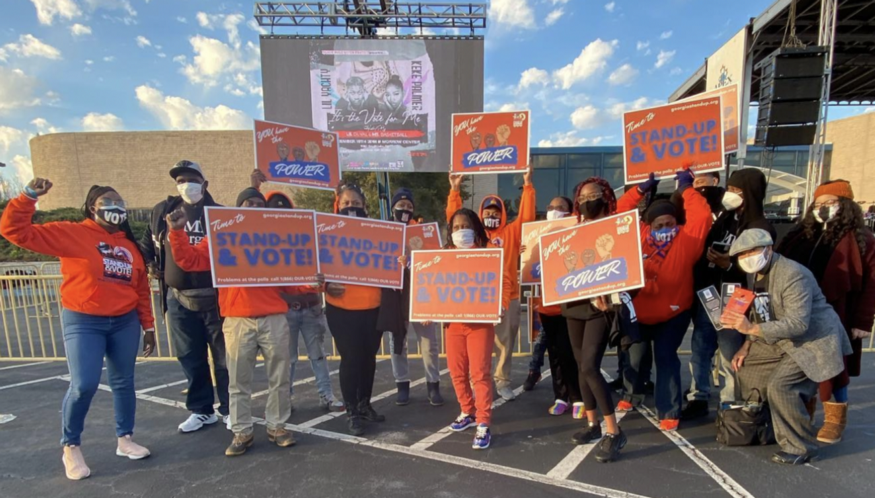 Felicia: Can you tell us about the work that Georgia STAND-UP is doing to protect voting rights and draw more people into our democracy?

Deborah: We focus our campaigns around two groups. The first is Black women. When we look at the numbers, we can see that Black women have been the base of important movements for change in the South and in Georgia. The second is Black youth. Working with 18 to 35-year-olds is how we grow the electorate. We need to make sure we merge that base that we depend on — those seniors or those Black women — with those young folks who are not necessarily as politically inclined. 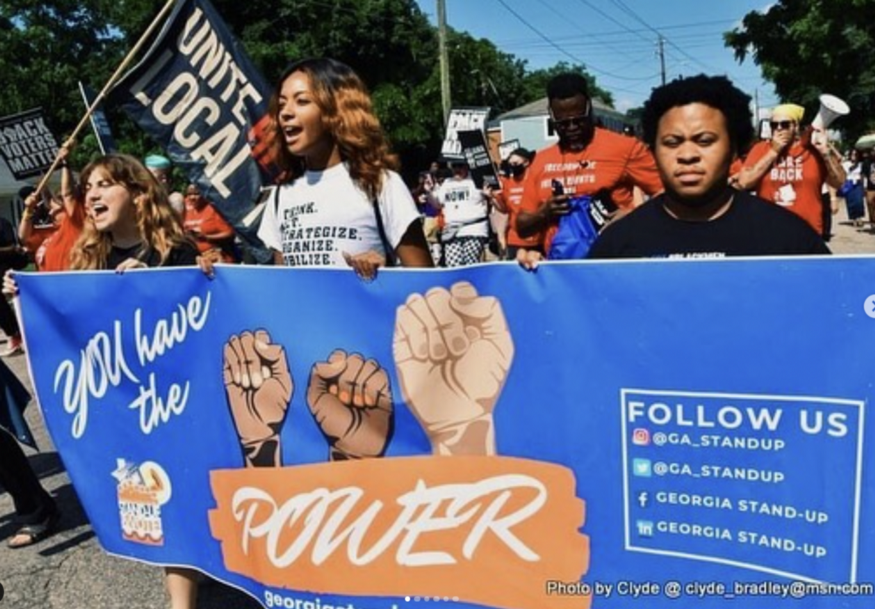 Part of our job is to be a service station for the community. We build trust and relationships through our job training programs, our leadership development work, and by connecting people with resources and support. Then we’re in the community working on racial equity issues, development issues, race, class and power issues.

What we’ve found is the more we show up in the community, the more folks will show up when we ask them to vote or knock on doors or attend a community meeting. 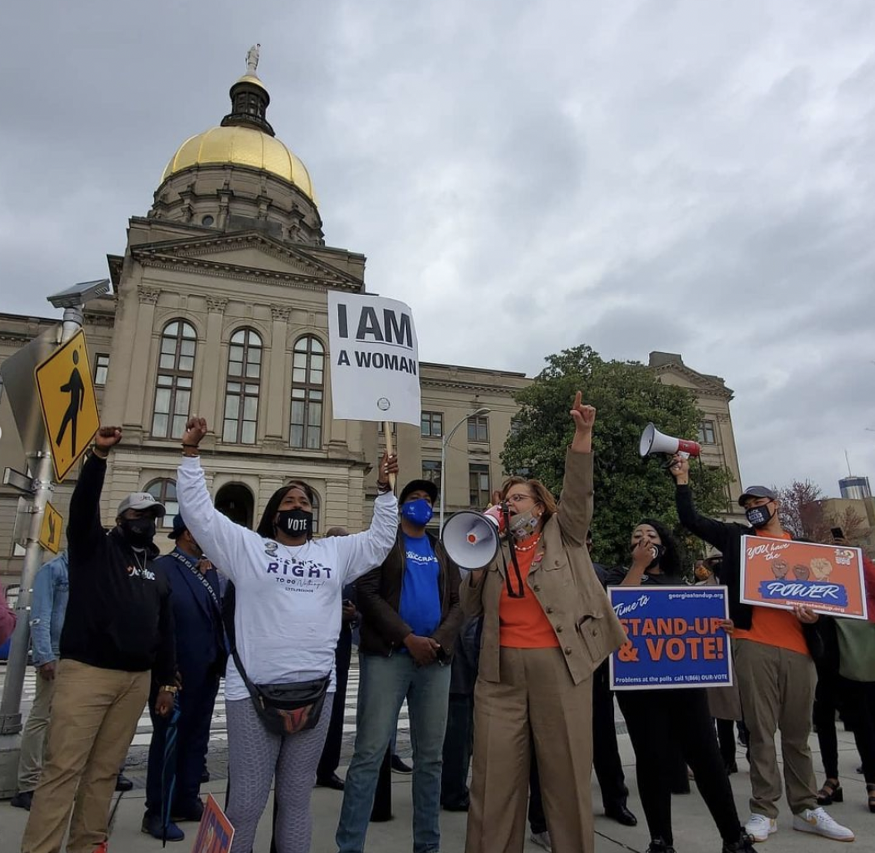 Felicia: Can you describe what that looks like? How do you lead people from coming to the service center to standing up for their neighbors?

Deborah: Our phone bank program is a great example. When we’re calling Ms. Jackson in Atlanta, we want her to get a call from a family friend or a neighbor or someone from church.

We ask ourselves, who are the people who could get Ms. Jackson mobilized? If Ms. Jackson was activated, what would she do for her community? If we’re calling Black women, we have other Black women on the phone. 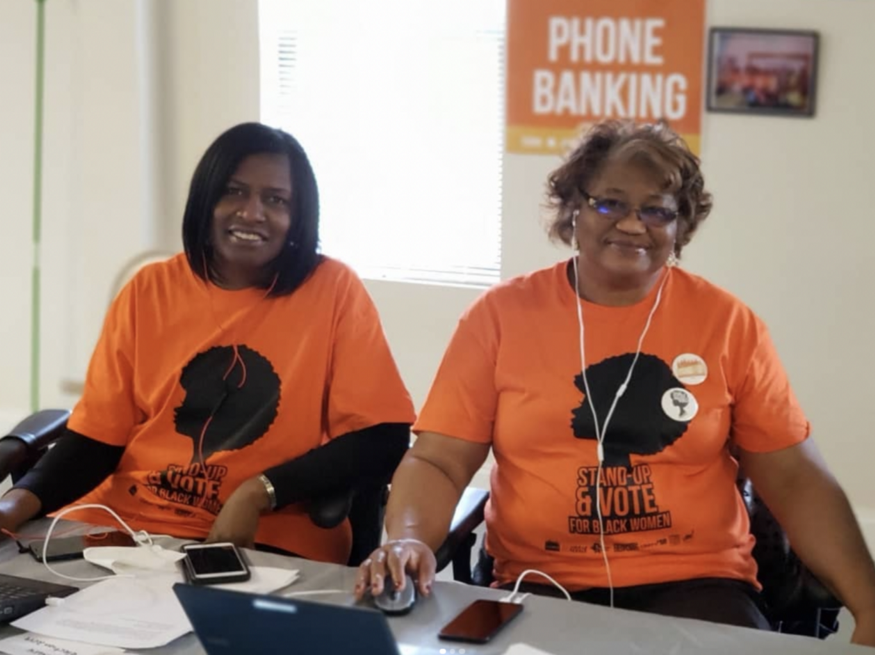 So it looks like Ms. Johnson calling Ms. Jackson and having a real conversation:

“Hello, my name is Deborah. How you doing Ms. Jackson? I see that you were looking for information the last time we called on where you can get your COVID test. Did you get that? Oh, good. The election is coming up, and we know that you’re registered because that’s in the list that we have, but how many people in your family are registered to vote? Do you need the link to get them registered?”

What we’re doing is asking Ms. Jackson to become an ambassador for this work. We’re also asking about what they care about:

“Are you a health equity voter? Are you a voter that cares about infant mortality? What is your key kitchen-table issue that you’re willing to get out and fight for and vote for?”

Felicia: As Georgia voters are becoming more activated and organized, what kinds of changes are you seeing, both in the community and in the national political landscape?

Deborah: 90% of Georgia voters turned out for the last Senate runoff election. A lot of observers were surprised by how high that number was, but we weren’t! That didn’t just happen overnight. It happened because organizations like ours have been working on voting rights for the last ten years. We’ve been registering voters, we’ve been organizing at the state legislature, we’ve been building coalitions with other movement organizations. At the same time, all good things and all bad things happen in the South, right? It was monumental when hundreds of thousands of people turned out to vote in Georgia in 2020. But now we’re seeing the backlash.

In that election, groups like ours worked hard to make voting fun. As people were waiting to vote we had music, we made it a party at the polls, we encouraged people to stay in line. Now reactionary state legislators passed SB 202 to make voting hard and miserable.

We weren’t surprised at the backlash, but we were shocked at how harsh it was. It’s against the law to give out water while people are waiting in line. I mean, that’s absurd. 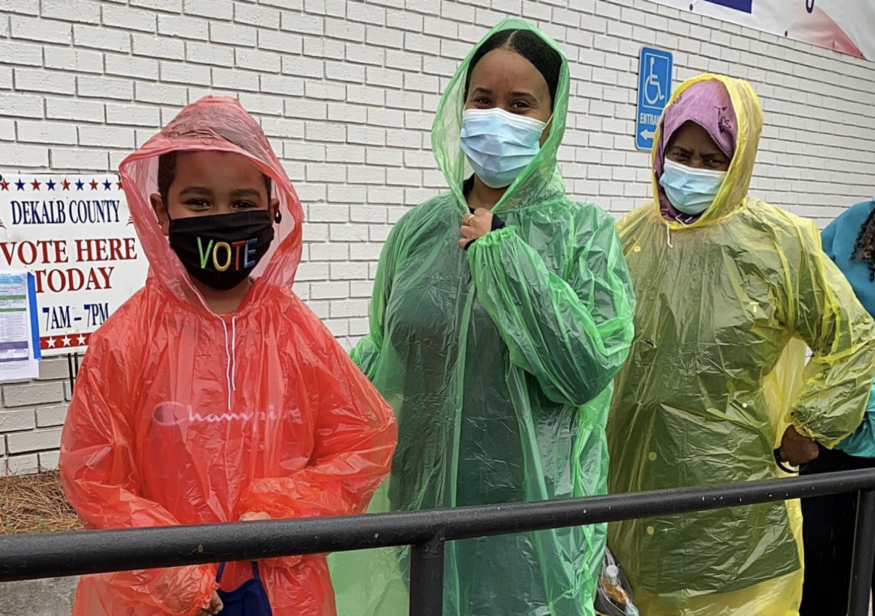 Our CEO, Deborah Scott and Organizer, Ariel Singleton at the National Center for Civil and Human Rights during The Senate Rules Committee meeting on voting rights. #standup #StandUPandVote pic.twitter.com/yXg79UM2h8

I’ve taken two arrests over the last few months — going to the Senate building and declaring that we are not going to continue to tolerate this.

We know that what happens here in Georgia is tested and duplicated in other parts of the South and the country. So the fight against these attacks on our basic freedoms has to be here as well.

Felicia: How do you sustain joy and community amidst all these attacks?

We do that in our work here. We’ve built what we call the Movement Center. It’s a 10,000 square foot center that we use and open up to other organizations.

Thank you to the painters union for volunteering their time to come canvass with us ! pic.twitter.com/4tARO4QDZ2

We have our phone bank, multimedia studio, meeting rooms, and a kitchen — we want a place for people to gather to organize and strategize together, but we also want this to be a safe place where you can do all that in community.

People need to have a good time. In the midst of a pandemic and voter suppression and these tough elections, how do you make doing this work fun? So once a week we have snacks, lunch, music, and we talk about what we did win. We talk about Black joy and ways in which we found joy in our own lives, because we realize that it’s all connected.

If you look at the larger circle of our community, you can’t move towards community power unless you feel empowered yourself. So we start with the self. We focus a lot on “How are you doing?” “What is your self care like?” “Where do you find joy?” “What did you do unrelated to a fight?”

And then we can talk about how many protests we did this week and how many phone banks we had, but we also ask, “Who are you and how does this work connect to who you are and what feeds your soul?” Because we know as activists, we get burnt out, but also the community gets fatigued as well.

Felicia: That’s so transformational and such a beautiful lesson about how the way we use our space and our time can create more freedom for each other and more power for our movements. Thank you for sharing it with us!

John Lewis Thank you for teaching us to get into “Good Trouble”! pic.twitter.com/FYY53skkGD

A More Just “Music City” that Works for All