The Supreme Court is trying to drag us backwards. 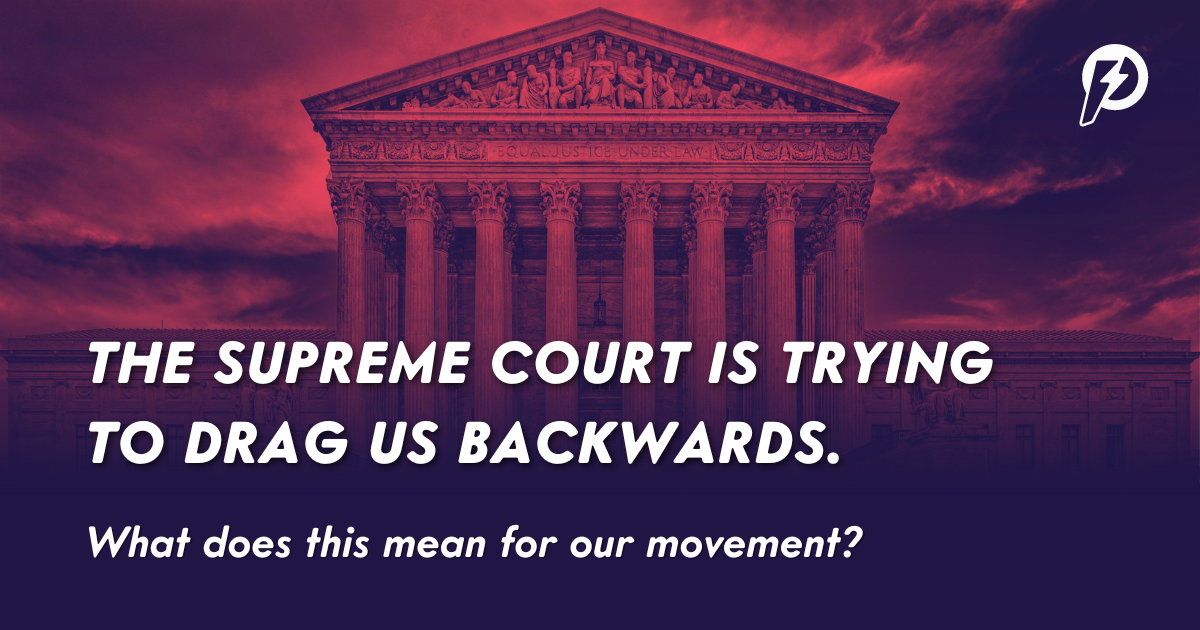 A Conversation with Lauren Jacobs and Ben Beach

With all of the horrifying decisions recently from the Supreme Court (and no end in sight to the reign of its extremist majority), we at PowerSwitch Action have been thinking about what the Court’s recent rulings mean for our communities, our movements, and our vision of a multiracial, feminist democracy. We turned to our Executive Director, Lauren Jacobs, and our Legal Director, Ben Beach, to discuss this moment and the implications of the rulings at the state, local, and community level.

Lauren: We know that the recent Supreme Court rulings are harmful and hold disastrous implications for gender-oppressed people, LGBTQ+ folks, and communities living on the frontlines of climate emergencies. Ben, you’ve been reading the decisions, what are you finding most concerning?

Ben: As you mentioned, these rulings, Dobbs in particular, have a real and harmful effect on millions of people’s lives. We’re already seeing instances of people being turned away from abortion clinics and hearing horror stories of medical emergencies exacerbated by the impact of the ruling and subsequent state trigger laws. And at the same time, in the majority’s opinion in Dobbs, we’re seeing the link between patriarchy and autocracy more clearly. That is, the willingness to use official power to force people who can get pregnant to have children—to police their bodies and reproductive choices, and to punish them if they resist—has become more apparent. The Dobbs majority showed absolutely no restraint or humility in casting aside 50 years of precedent to exercise its power this way. What’s more, over the past forty years, the share of Americans who believe that access to abortion should be legal in all or certain circumstances has steadily increased from 75% to 85%.

On the state level, we’re witnessing a similar audacity in the use of power. The Supreme Court may claim, as it did in Dobbs, that returning the issue of abortion back to the states is a democratic measure, but we know that the states enacting abortion restrictions (especially those that were ready and waiting with trigger laws) are not representative democracies. In addition to over-representing the wealthy white men, too many of these same legislatures have arrived at their composition through a combination of gerrymandering and voter suppression. In short, these decisions both reflect and enable authoritarian governance.

That’s what’s on my mind right now. Lauren, I know you’ve been thinking a lot about the larger political context of the current moment. How do you see these court decisions fitting into that? What does this mean for our democracy?

Lauren: Yeah, it is stunning to see this anti-democratic agenda being rolled out so swiftly and effectively after the right captured the high court. I wrote about something similar in an article for The Forge earlier this year which speaks to an alliance being built among our opponents. In particular, we’re seeing corporate power players and christian nationalist political figures allying in a way that is very clearly strategic and in service of a larger political project to consolidate more power among elites, particularly white wealthy men.

We can see their agenda unfold through the Dobbs decision. This is about bodily autonomy, but I am also thinking about how this ruling speaks to labor and economic issues. There is a reason why we call giving birth ‘labor.’ This is forced labor, literally. The alliance is attempting to haul everyone back to a time that was dominated by antiquated gender standards and gender roles related to the division of labor. What’s more, denying people safe, legal access to abortion restricts their ability to have any semblance of control over their economic lives. In the end, this is forced labor that could cost someone their economic stability, their future, and even their life.

Ben: Absolutely, there is definitely a sustained effort to “take us back” to a time where essentially only white men had rights. In Dobbs, the Court’s majority expressed full-throated traditionalism, which seeks to protect the “Christian West,” including by eschewing democratic rights and freedoms. (For example, the Dobbs majority looked to rules and practices of 13th century England to define what liberties our Constitution protects today.) As Political Research Associates put it, traditionalists’ goal is to “‘restore’ the United States as a so-called godly nation by and for a narrow subset of Christians.”

In the EPA case (West Virginia v. EPA), the Court advanced the neoliberal project of dismantling the administrative state in service of allowing capitalism to run amok. As Nancy McLean, author of Democracy in Chains, has explained, the end goal of that project is to eliminate any democratic checks on private property rights. Both of these projects align in casting aside democracy and granting wealthy white men extraordinary power over almost everyone else.

This is worrisome, particularly as the Dobbs concurrences identify potential future targets for the Supreme Court. As we look ahead to upcoming cases the Court has agreed to hear next year, we can and should be concerned about decisions regarding affirmative action, election laws – in one case, whether Alabama can draw a congressional map that consolidates Black voters into one district – and Congress’s ability to regulate corporations.

Lauren: Agreed, the recent rulings are absolutely evidence of threats to democracy. I’m also thinking about the implications for our movements and our people. Our conversation points to a couple of key themes. First, our opponents will use authoritarianism to ensure that the oligarchy that they have constructed and benefitted from continues. Second, they will reaffirm and protect this elite rule through the tools of patriarchy and white supremacy. What’s important to understand is that there are people who heartily and deeply espouse white supremacy and patriarchy, and there are people who do not, but still see an economic incentive to supporting such a system. In other words, they see a means to controlling the economy in their favor by aligning with anti-democratic christian nationalists. This is a daunting alliance of opponents given the resources and institutional power they hold in their hands.

So, we need strategies that fight against them, that block their access to institutions of power, and that also shift power back into the hands of our communities where it belongs. These strategies must also move us toward a multiracial feminist democratic society. In doing so, it’s important for us to balance pushing back and driving forward. We must fight the forces of autocracy — like how our network has been challenging Amazon and other big corporations — and we have to be creative and visionary in how we aspire to hold and wield the power to transform our communities, our economy, and our society. We’ve been building towards this through our work on people-powered budgets, through community benefits agreements and tenant organizing, and by moving power over to working people.

Ben: The balance between reactive and proactive strategies is really important. I think in these moments of intense crisis, we very rightly feel untethered, scared, and desperate. With all due respect to the long history in America of incredible work to establish legal rights for oppressed people,  I also think we have to abandon any attachment to the idea – for as long as this Court majority holds –  that our federal constitutional framework is adequate to protect our communities and that federal litigation strategies by some very smart hardworking lawyers alone can save us.

Lauren: Yes. The Supreme Court’s decision to return issues like abortion back to state legislatures changes the battleground. As federal rights are eroded, this is where the importance of state and local organizing comes into play. Our affiliates and allies know this—and so do our opponents. For years we have been bringing people together in cities to contest for power. And what we’ve learned is that we have to be nimble and able to pivot quickly to whatever new challenge arises. The tactics that served us yesterday may not work today, and the ones that work today may not succeed tomorrow—we need to be prepared for that as a movement. In the same vein, strategies and goals that once seemed impossible or ludicrous may suddenly be within our reach. We have to be aware of the places (old, new, and shifting) where we can advance our vision for a multiracial feminist democracy.

On an individual level, I know things feel bleak right now. It is a demoralizing moment. But we can hold onto hope as a radical practice. We should absolutely grieve, be angry, and feel everything that comes up. And we can take those feelings and put them to work — doing the organizing and building the shared power we need to bring about real change in a way that honors and celebrates who we are as individuals and what we envision for our world.